Courage the Cowardly dog Wiki
Register
Don't have an account?
Sign In
Advertisement
in: Characters, Animals, Antagonists,
and 4 more

Katz is a lanky, anthropomorphic red cat with yellow eyes, purple tipped ears, and 3 purple stripes across his back whose ends show on each side of his waist. He is an antagonist whose first appearance was in the episode A Night at the Katz Motel. He has frequently returned to the show, making him Courage's personal arch-nemesis and the most prominent (and, admittedly, a fan favorite) villain in the show. He is voiced by Paul Scoefller

Katz is a smooth and sadistic feline with a somewhat British accent complete with his own sinister background music theme whenever he appears. Like most felines, he has a powerful distaste for dogs. Since his debut, Katz's top priority has always been in helping or advancing himself in some (usually conniving) way. He is also very competitive, as shown in katz kandy, where he tried to force Muriel to tell him her secret ingredient for her sweet recipes after coming in second place to her in the Nowhere Sweet Stuff Contest for years. Thus, crushing his competition is nothing new to Katz. Katz enjoys a few things, such as making confectionary treats, or managing his collection of spiders. The only things he shows much compassion for outside of his own interest are his "loves" (aka his spiders).

Katz is quite the con artist, as well, specializing in scam businesses such as a vacation resort, a confectionary shop, a motel, and a submarine cruise line. Although he always performs these scams with the intent to kill the patrons when he has no further need for them. Two of his common targets are, of course, Eustace and Muriel (who never seem to remember him from previous cons). But even if Muriel and Eustace are fooled by whatever service he is providing, Courage never falls for his schemes. Because of this, all of his businesses enforce a strict "No Dogs Allowed" policy, which forces Courage to have to sneak in to save his two owners.

Despite his sinister nature, Katz has always enjoyed a bit of pre-defeat "sport" with Courage, which he is quite apt at. He usually suggests a "little spot of sport" when he believes it is becoming too easy for him to defeat Courage. He and Courage then engage into small battles between them in the form of games, such as a staring contest. It is to be noted that Katz is a master of stares, if not The Master of Stares. It is common in some of these games that Katz will egg his opponent on into losing. For example, during the said staring contest, he kept saying "blink" when he saw Courage's eyes watering. And while he may choose to do things the way with the least exerted effort on his part when he can afford it, he has shown some slightly above-average athleticism (or at least enough to play racketball or run away from a wrecking ball going after him).

As stated above, Katz's first appearance was in A Night at the Katz Motel . In it, he runs the Katz Motel, where Eustace and Muriel get a room for the night. Because of the "No Dogs Allowed" policy, Courage is forced to be outside on the porch. It turns out that Katz runs the hotel to supply food for his collection of spiders. He sends one out to get rid of Courage, while he captures Eustace and sneaks another spider into Muriel's bath. After escaping the spider sent out for him, Courage makes his way inside to save the old couple from being the spiders' dinner. Katz foils his attempts and challenges him to a dynamic game of racketball. Though Courage loses and is held down by Katz, who is holding a spider above him, it is Muriel who bashes Katz on the head with her rolling pin to knock him unconscious for them to leave safely... except for maybe Eustace.

His next appearance was in klub katz. This time, we see Katz running the exclusive Klub Katz on an island, where Eustace, Muriel, and Courage are washed ashore after a luxury cruise goes awry. He takes Muriel and Eustace to the spa, which of course has "No Dogs Allowed." When Courage sees Katz come out with his owners, Muriel and Eustace have been transformed into a washing machine and a wrecking ball, respectively. Katz pits them both against each other in an abandoned coliseum where he runs a machine for applause while he watches from Eustace's chair (which he salvaged from the shipwreck). Courage goes into the spa to turn himself into a helicopter and rescues Muriel from the coliseum. Eustace, noticing Katz has his chair, takes a whack at the feline, only to destroy his chair when Katz dodges. he continues to chase Katz around trying to hit him, while Katz tries to suggest therapy and reason in vain.

The third time one sees Katz is in the episode katz kandy. It is in this episode that Katz is shown to have his own candy store, Katz Kandy. The 43rd Annual Nowhere Sweet Stuff Contest is coming up, and he has won second place every year to Muriel, a fact that saddens and frustrates him. He whips up a jam monster to kidnap Muriel so he can get her to tell him her secret ingredient. Courage comes along for the ride, of course, with Eustace not far behind following (and eating) a jam trail left by the monster. While inside Katz's lair, Muriel refuses to willingly give him the secret to her recipes. he puts her on a candy cane over a taffy pulling machine and binds Courage with other taffy. Katz threatens Muriel to tell him her secret or he will pull the lever, which will lower her into the machine, which will pull her into a taffy. Courage manages to eat his way out of his binds and fight with Katz while back in the candy store, Eustace is beating the jam monster. Katz gets the upper hand in their bought though, and challenges Courage to a starring match when it becomes too easy for him to win. Courage holds up even with Katz egging him on to blink until Eustace enters the lair, effectively startling Courage enough to make him blink. Katz tosses Courage into a different machine that makes Courage into a candy cube. Katz goes back to the candy canes where now both Eustace and Muriel are, and fights Eustace while hanging onto the candy cane trying to use his legs to pull Eustace down into the taffy machine (and vise-versa). Courage rolls to the lever and the candy cane Katz is on goes down into the machine and Katz is pulled among the green taffy, still asking for the secret ingredient. Before they leave, Muriel tells him that if he must know, it's vinegar. Katz 'cheers' that it's vinegar. He makes it to the Sweet Stuff Contest, but he loses 1st place to Muriel yet again, and this time, he's his own entry, for he is shown as a green piece of taffy shaped akin to a wiener.

It seems Katz found a way to return himself back to normal by the time he is seen inKatz Under the Sea. In this scam, he is the captain of the SUB Standard Cruise submarine, the vacation submarine for those who feel overworked. Muriel, who is being overworked by Eustace, takes Courage there in need of a break. After appointing Muriel as his first mate for making tea, Katz says "No Dogs Allowed" and tosses Courage to the side (Courage, of course, stows away in another passenger's luggage). Courage masquerades as a ventriloquist doll, which fools Katz for enough time for Courage to figure out that Katz is planning to have the submarine blow up once they reach the bottom of the sea. Katz mistakes Muriel's complaints about the smell of the explosive 'Tea-N-Tea' for confirmation that she is a spy sent out to thwart his plans for blowing up the sub. He reveals that he plans to swim to safety while he ruins SUB Standards Inc.'s cruise so that his own Katz Submarine Cruise will get all the underwater vacation business. So once again, he is crushing his competition. Unable to find help, Courage tries to stop Katz, who is about to make his getaway, himself. Katz realizes he's a dog, and during their tumble, Courage breaks the lever that sets the course of the submarine on a collision course with the sea floor. Katz escapes into the ocean, but then finds himself swallowed by a shark. While Courage manages to save everyone, Katz is left in the belly of the shark demanding to not be eaten.

Katz apparently managed to get out of the shark no worse for wear, as he last appears in ball off revenge, along with all of the other villains whose various plans were foiled by Courage. Called to the farmhouse basement for a secret meeting by Eustace (who is jealous of Courage), he and the other villains make a plan with Eustace to get rid of Courage for good and have their revenge. Once they capture Muriel, she resists screaming (which is the bait to get Courage to come to her rescue). Katz begins his own brand of torture for her, by mixing the whites and colors in the washing machine and adding a ton of bleach as well. This effectively makes her scream, and Courage does race downstairs where he is jumped by the villains. Katz suggests a bit of sport before he slowly dies, which Courage is forced to accept. The game: Dodge ball. It's the villains against Courage, with Muriel and Eustace as spectators and Le Quack as the referee in Courage's last big show down with his enemies. Katz throws a ball with spikes at Courage, who evades getting hurt by it. Katz is then shocked and disgusted by the unrefined weremole, who eats his dodge ball. During the game, Katz helps his teammates, and pulls out a flame thrower when Courage is on his last legs and is about to lose. Muriel encourages Courage that there must be something he is good at, which gets him thinking. Then, sicking in much air, Courage does the thing Katz and all his foes have helped him perfect the entire series: SCREAM. Courage screams so loud that the ground shakes, and Katz, along with all his teammates, fall into a hole created by the chasms of shaking ground that the scream made.

Katz in a night at the katz motel 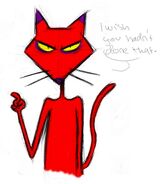 I wish you had'int done that!

Katz in Katz under the sea

Katz in Katz under the sea with scuba gear
Community content is available under CC-BY-SA unless otherwise noted.
Advertisement